On the 22nd of May 1966, McLaren made its Grand Prix Debut at the Monaco Grand Prix. Lead by the ingenious engineer-come-professional driver Bruce McLaren they were the quintessential underdogs from New Zealand.

Painted in white and dark green instead of the iconic McLaren Papaya Orange was all part of a deal struck with the producers of John Frankenheimer’s  film “Grand Prix”.  The deal allowed footage of the McLaren M2B’s to be used in the film as the hero cars for James Garners character ‘Peter Aron’, defying the convention of the timethat was to paint the cars in their national colours. The Orange they are so well known for came about in the late 1960’s.

As the saying goes, a hard beginning makes for the greatest endings and McLaren’s story was no different, with mechanical woes  stifling the team’s Grand Prix dreams early on. A shift from their initial Ford V8 engines to an Italian designed V8 eventually earned them their first point of many at Brands Hatch with a 6th place finish. 1967 saw them adopt BRM’s brand-spanking-new V12 and their new bright orange hue. In fact, through the years McLaren have seen success with V6’s, V8’s and V12s in both turbocharged and naturally aspirated forms and their continued success throughout the decades can all be accredited to a 13-year-old Bruce McLaren and one Austin Ulster. 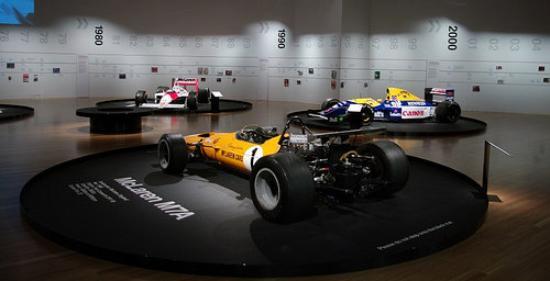 So a happy 50 years McLaren, and we wish you a successful 50 more!