Toyota is beefing up the Toyota Hilux range with the addition of three new variants in the second quarter of 2018. Toyota will add the Rugged X, Rogue and Rugged to the HiLux range as the Japanese manufacturer looks to maintain their stranglehold on the 4×4 segment with 12 years as Australia’s best-selling 4×4.

Toyota’s latest flagship model, the HiLux Rugged X, will be the most off-road capable Toyota HiLux to date. With the inclusion of some serious 4×4 accessories, it’s not only extremely capable, but looks the part too. Alloy bash plates, hoop-less steel bull bar (winch compatible), snorkel, gloss black surrounds, rock rails and other “heavy-duty components” all set this new beast up to take on some of the harsher terrain found in Australia all while keeping Toyota’s renowned reliability and style.

Sean Hanley, the Vice president for sales and marketing at Toyota Australia has even addressed the increase in accessories fitted to the car from factory saying, “HiLux buyers increasingly demand additional features – in fact, they spend more on accessories than any other vehicle in our range.” Hanley also added that the “HiLux Rugged X is a no-compromise vehicle for those seeking adventure with a robust and capable vehicle that makes the ultimate statement: work hard, play harder.” 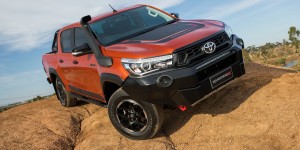 The middle child of the new trio is the HiLux Rogue. Aimed at being the more premium looking HiLux in the range, it takes some styling from the recently released SR5 model however with some revisions for 2018. The upper grille sporting a hexagonal design, the front bumper now heavily revised and the fog-lights have been completely restyled.

Hanley added that “these new vehicles will enable them to make a statement with advanced toughness, added capability, practical comfort, first-class safety and the in-built strength that makes HiLux the indisputable number one,” and that the “HiLux Rogue is for people who want refinement and capability, enabling them to go for weekend adventures and do it in style.” With the latest revisions and tweaks, Toyotahas hit the mark. 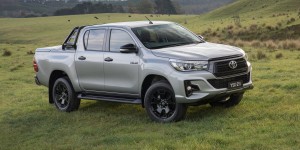 The final member of the 2018 trio is the new HiLux Rugged. Styled similarly to that of the early mentioned Rugged X, but without the heavy-duty additions. It gets the off-road look of the Rugged X with features such as a premium Toyota steel bull bar and a uniquely designed front end.

“HiLux Rugged is about toughness and off-road performance – an ideal vehicle for getting off the beaten track”, said Hanley. 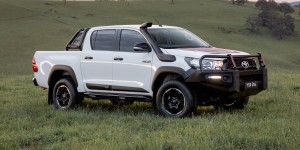 Pricing for the new range is still only speculation, however the current SR5 starting price of $54,440 is a good guide that the trio’s pricing may be starting from slightly more than that.