Performance Exhausts: How to Choose Between Bolt-On and Custom

An upgraded exhaust system is one of the most simple and effective ways to boost the potential of your engine. Allowing for the quicker escape of exhaust gases and less expenditure of energy to accomplish this, performance exhaust systems help drive up the efficiency and power of your engine. Generally, these come in either bolt-on kits from companies like XForce Performance Exhaust, or are custom made for your vehicle. Which one is right for you though? Let’s take a look: 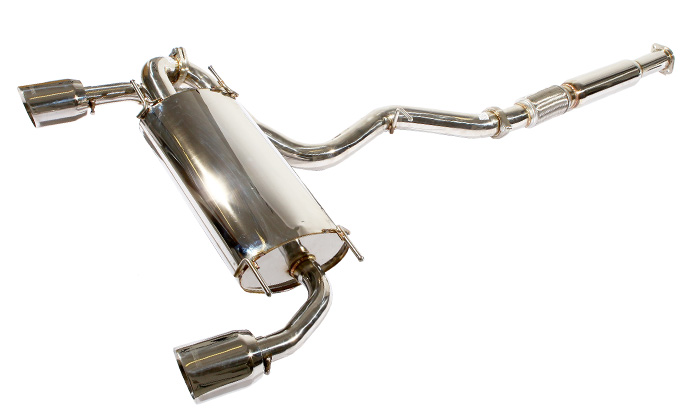 There are many factors that simply make a bolt-on exhaust system easier, cheaper and less hassle than a custom exhaust system, the most obvious of these being that they simply bolt on, as the name implies. If you follow the instructions properly and do the installation yourself with with a group of trusted people, there’s no reason you can’t have a bolt-on exhaust system fitted in an hour or two, saving yourself both the time and money of professional installation.

Every bolt-on exhaust kit is made to fit the specific vehicle down to a tiny measurement, and will simply bolt on without any hassle. This perfect fit every time ensures you don’t have to worry about issues of reliability, particularly if it’s made of a high quality material such as stainless steel. Each bolt-on system is dyno tested to meet the standards of the particular vehicle it’s made for.

Since they’re generally mass produced, you also have a greater peace of mind with regards to build quality, ease of maintenance and repair if something were to go wrong, along with the quality of the bends and turns that are situated within the internals of your exhaust pipes. A lot of the time, if you pick a good one and fit it properly, it won’t need much maintenance for the life of your car, if any at all.

Obviously, they also generally tend to be cheaper than custom exhaust systems, which most people like.

There are two main issues with a bolt-on exhaust kit. First of all, if companies don’t offer a bolt-on solution for your car, then there’s not much you can do short of having a custom system made. Secondly, if you do find one for your car (which in fairness you probably will), once you bolt it on that’s pretty much it. It doesn’t offer much in terms of customisation and tuning, and while most bolt-on systems are tuned to ensure a significant performance increase, you’re always going to be limited by the constraints of the system you’ve installed.

This is only generally a problem for racing cars though, and in many cases the amount of added performance you’d be able to squeeze out of a custom exhaust system just doesn’t justify the amount of extra money you’d pay for it.

The clear benefit of a custom exhaust is that as the name implies, it can be fitted, tuned and built to the requirements of the specific vehicle you drive. This is especially beneficial if you’re driving competitively, and need a system that provides a greater level of refinement than a standard bolt-on kit. Options such as twin dump pipes and varying sizes of primary runner lengths and mufflers are all made available with custom exhausts, which you don’t get with bolt-on systems.

Because of this, many custom exhausts, particularly the more expensive ones, ensure that your car gets the maximum performance boost that it’s possible to get out of your exhaust system, and offer a greater degree of customisation on the cosmetics, for instance the way your muffler tips look. Many bolt-on companies such as XFORCE offer singular parts such as mufflers and tips which enable for specific customisation, without having to go to the cost of building an entirely new system.

As we’re sure you’re aware of by now, custom exhausts are pretty damn expensive. Sometimes around 3-4 times the cost of a bolt-on system for the same car in extreme cases. They’re hand-built, and cost all the labour, parts and materials that come associated with that luxury. Often, this cost just isn’t worth it when you could get a similar performance upgrade from a bolt-on system, particularly if you’re not taking to the track on a regular basis.

The nature of hand-made products also presents reliability as a bit of an issue. If you go to a good exhaust company, chances are they’ll last a lifetime and be made to handle every rev you can squeeze out of your engine. If something goes wrong though, your exhaust system is yours alone, leaving you and your credit card at the mercy of whoever built it in the first place.

If you simply want better performance and better sound from your daily drive or occasional track toy, a bolt-on system is the better choice every time. We offer many different styles of bolt-on exhaust systems, including the reliable and affordable XForce S-Spec Exhaust. More advanced systems on offer include XForce R-Spec Exhaust, Xforce Pro Series, and Xforce Extreme Exhausts.