Common Car Noises to Listen Out For

Given the amount of moving parts inside the modern day vehicle, it’s to be expected that your car will make some noise. However, failing or worn parts in your car will often make themselves known audibly. To help you identify which noises you should pay attention to, we’ve compiled a list of common symptoms to keep an ear out for…

My Brakes Squeak or Squeal when being applied?

There are a few reasons why your brakes might squeak or squeal when coming to a stop. The most common reason by far is worn brake pads. Brake pads have a small metallic finger attached to them, that once worn, contacts your disc rotor, making the squealing sound we’ve all heard before (from our own car or from someone else at a set of lights). This is done intentionally for the exact purpose of making it clear your brakes need attention. If you have noticed this sound coming from your car, it’s advisable to have your brakes checked as soon as possible. Continuing to drive with worn brake pads can result in the need to also replace your brake discs.

The other (less common) causes of brake squeal is Glazed Brake Pads. This is caused by the brake pads being heated to a temperature beyond their normal operating range, causing the pad material to break down and adhere to the disc surface. As a result, two surfaces of equal hardness come into contact. This is often a fairly straightforward and simple fix, though your discs may require machining.

Performance orientated brake pads are prone to squealing when cold, being designed to cope with higher temperatures they are made with quite a hard compound though this is usually evident immediately after the pads are installed.

My Steering makes a “whining” noise when turning, but makes no sound when still?

This can be caused by two things. The first and foremost is air becoming trapped inside your power steering system. This usually comes about due to a lack of fluid in the reservoir, requiring a top up and a system bleed (while it’s a simple job). This is typically an affordable process which can be tasked to your preferred workshop.

The less common, more dramatic cause of this sound is a failed power steering pump. If the system bleed has not cured the noise, this is the most likely cause.

My car makes a squeaking sound thats relative to engine RPM, particularly on cold start up?

This is a very common problem that’s caused almost exclusively by accessory belts lacking correct tension, or becoming dried out. A quick inspection of your accessory belts for cracks or deteriorating (as shown below) will reveal if your belts require replacement. If the belt appears to be in good condition it may require tightening (they can stretch over time), or lubrication with a touch of appropriate grease. Your mechanic should be able to advise you on this quite quickly, though belts are such cheap items I usually replace them regardless. Its worth noting that a toothed Timing Belt will NOT cause this noise and under no circumstances should the timing belt be re-tightened  by anyone other than a professional and never lubricated. 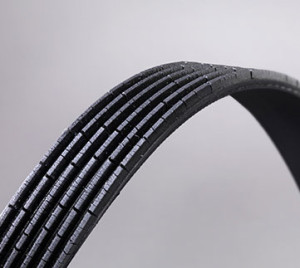 My engine sounds noisier than usual, the general knocks and taps it normally makes seem louder?

All engines produce some noise as metal components are revolving thousands of times per minute. If the engine seems to be noisier that usual, it’s advisable to check your engine oil as it may be low. Its good practise to make a habit of checking your oil once a week as the results of letting it run low can be costly and disastrous. If your vehicle has a few km’s on it, it may require a tappet/shim adjustment.

This is a telltale sign of oil starvation, or worn internal bearings. Your first point of call should be checking the oil level. If the oil level is fine, consider when it was last serviced and have a service performed if it requires one.

The more extreme cause of this noise is either a poor quality oil filter that doesn’t have an anti drain back valve, or a partially blocked oil pick up within the engine. A blocked oil pick up will prevent your car from providing proper lubrication. If your oil is at the correct level and you’ve had it serviced recently, check to see if you have a quality oil filter fitted. Be sure to Ask your mechanic to take a look as your engine will not last long if you leave it.

This is usually referred to as “knocking” or “pinging” and is the sound made when the air/fuel mixture in your engine is pre-ignited. The most common cause of this is using a fuel of a lower octane than your car requires, being more volatile and easier to burn. Heat created in the combustion chamber can cause the fuel to self ignite before the spark plug does. A higher octane fuel is harder to burn and can remedy this. It sounds very similar to the sound a diesel engine makes as a diesel relies on self ignition to operate. Most modern day cars have sensors to identify this and alter the timing of the spark before you’ve even had a chance to hear it. As such, this issue is more common in older cars. Other less common causes can include incorrect ignition timing, Incorrect spark plugs or a lean air/fuel mixture. If your vehicle is old enough to have a mechanically timed ignition, you may need to have a mechanic check the ignition timing and fuel supply. In extreme cases, the pre ignition can cause the engine to continue running after being shut off, this is referred to as “Dieseling” or “running on”.

I can hear a light puffing or hissing sound from under the car?

Firstly check to see if there is a cat under your car (it happens). However, if can still hear a sound similar to gas escaping, it’s most likely a leak in your exhaust system. The easiest way to check this yourself is to have a friend block the exhaust pipe – use a dense rag and gloves! The gasses can be quite hot. Once the exhaust pipe is blocked, listen for the hissing or puffing underneath the car as the exhaust gasses will escape through the only passage it can. In some occasions this can be as simple as replacing a gasket, but in more extreme cases you could require welding or complete replacement of your exhaust. Some cars have design faults that cause this. A good example of this is the exhaust on an AU Falcon 4L, which is prone to cracking after the headers near the driver door.

Another indication your exhaust has seen its day is a rattling underneath the car when running. What your hearing is the material inside your muffler (or Catalytic converter) falling apart and being bounced around inside the exhaust. Again, if your unsure or not confident its always best to have a mechanic check it for you properly.

I can hear a clunking when I drive over bumps and rough roads?

Noises like this are a little more difficult to immediately diagnose as it can require an experienced hand to identify correctly. Common causes can include worn out shock absorbers, shock absorber mounts, sway bar links or ball joints. Its not unusual for these parts to wear and are readily available for most vehicles, though the noise can be tricky to isolate. It’s best to have it looked at sooner rather than later as leaving it can result in haphazard handling and accelerated tyre wear, costing you more money in the long run.

My clutch pedal shudders when releasing it from a stand still?

This is almost always an indication of a flywheel in need of machining or replacement. Working in a similar fashion to a brake pad and disc, a flywheel is subject to the same issues. A flywheel’s surface can become glazed and grooved, often resulting in shuddering, and in extreme cases, slipping. Most modern vehicles have what is referred to as a Duel Mass Flywheel (DMF). These have a rubber component designed to absorb vibrations and like all rubber components they deteriorate. Its recommended you replace these whenever you replace the clutch, as a deteriorating DMF can cause pedal shudder and are quite a pain to replace.

The image below shows a heavily glazed flywheel. The speckled surface is supposed to be completely flat with a uniform machined finish. 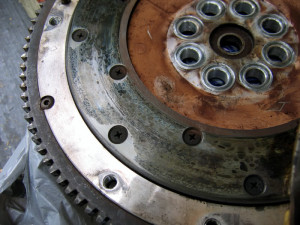 Theres a light consistent clicking when I turn a corner?

This is an indication of worn CV (Constant Velocity) joints. The joints transmit driving motion from the gearbox to the wheels, while allowing the wheels to be turned and move up and down with the suspension. They operate in a similar fashion to the ball and socket joint in your shoulder. the joints are protected by rubber boots to stop dirt and road grime working its way into the joints, though they can split. It used to be commonplace to have the joints removed from the Constant Velocity shaft and replaced, though entire replacement shafts are readily available and often cheaper. This noise can prove quite dangerous if not addressed as its possible for the joints to wear to such an extent that they seize up. This results in one of your wheels locking with little to no warning – though this is in very extreme cases. 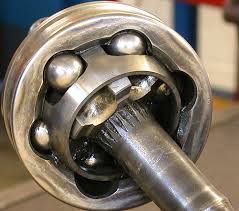