The Ford Firestone Controversy: What Happened

Ford and Firestone, for many years, enjoyed a strong relationship that was great for both parties. Taking America and the world by storm together, the partnership Henry Ford and Harvey Samuel Firestone formed was pretty special. Not just business associates, the two were known to socialise together. In fact, their families even married into one another – how’s that for friendship? Since the birth of the elite automotive tag-team, it had been high fives all round. Yet what happened in the summer of 2000 would extinguish the legacy of the last century, ending a 100-year relationship in a matter of weeks, at least momentarily.

Ford and Firestone were investigated in mid-2000 by the US National Highway Traffic Safety Administration challenging the partnership on the abnormally high number of tyre failures on Ford Explorers. What ensued was the most uncomfortable game of corporate blame table tennis ever witnessed. It went something like this:

It doesn’t take years of law school to form these eloquent arguments, but they both stuck to their guns. Ford’s point was pretty simple: Firestone make the tyres and, as a number of deaths were a result of Firestone tyre blowouts, the blame lay firmly at their door. Firestone, quite predictably, responded that Ford’s vehicles lacked the required stability to make the Ford Explorer even close to road-legal. 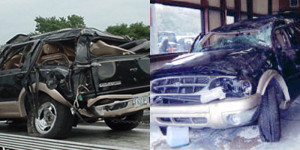 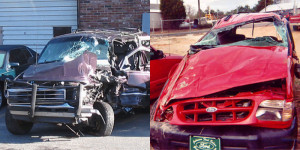 Over 200 deaths, some 700 injuries, and numerous lawsuits came as a result of tread separation – a direct fault of the tyres. Undoubtedly, this was a serious flaw that did not compare to minor manufacturing faults that are commonplace in any industry. No, this had ruined lives and brought executives into the highest courtrooms in the land.

The problem with the Ford Explorer was that tread separation, in the most extreme of cases, meant the SUV would tip, causing an extremely violent rollover. This emerged from a chance that Ford took in 1987. Findings dictated that the Explorer must widen its shape in order to lower its centre of gravity, with the end goal of providing stability at higher speeds. Yet after much ado, the verdict was made by the guys at Ford that, since production would be delayed for quite some time if the Explorer was to go through a redesign, the SUV would not have its wheelbase broadened.

Stability issues were identified from the off. In 1991, the first tread separation case was filed against Ford and Firestone. Cases then accelerated massively after 1994 when it was decided that to increase fuel economy, Ford and Firestone would make the tyres lighter – which, I’m sure you can guess, reduced rolling resistance. Firestone, on Ford’s request, reduced the weight of their tires by 10%, which crossed the line between “kind of safe” and “are you completely mental?”.

After the reduction of weight, the number of tread separation instances grew rapidly. There are factual reports of the tires completely removing themselves from the tire body, which might sound like something from Wacky Races, but, nope, it’s actually from real life.

Several claims followed, many of which were settled without public knowledge. The game changer was in 2000 though when, as said, the US National Highway Traffic Safety Administration decided there is a limit to the amount of payoffs that can be given as a result of life-changing injuries and deaths. 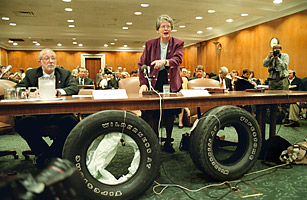 Over six million tyres were recalled in 2000, by Ford, as things got a bit real for them. Findings revealed that there were both possible tyre flaws at Firestone and design flaws at Ford. Of course, you could make the point that if the tyres were at fault, this is the tyre producer’s responsibility. And, naturally, you could argue if these tyres were fitted to a Ford vehicle in a Ford factory, then Ford is culpable for a lot more than Firestone.

No-one has accepted, or been given, full blame for the tragic outcome of the Ford-Firestone partnership, even to this day, but it did stop the once-fruitful relationship stone dead. After lengthy, tit-for-tat courtroom/playground drama, the two decided business together was no longer for them, and an American legacy was in ruins. At least for a while.

The mutual boycott was pretty short-lived, as Ford are now supplied by Japanese tyre giants Bridgestone – owners of the Firestone company since 1988. The dark, unfortunate past of an age-old enterprise that once dominated the automotive industry has been swiftly swept under the (presumably pretty bloody massive) carpet and the twosome have reinvented their partnership under a new image.

Whoever is to blame, it seems that perhaps car buyers don’t have long memories. Or perhaps the world has forgiven and forgotten. Either way, it’s certainly interesting that a partnership that had such a lasting, destructive impact on hundreds of Ford buyers has been swiftly ignored. Just as Ford and Firestone settled many claims before 2000 with minimal fuss, hoping it would all just go away, it seems the public would rather not know the details of this controversy.