The Hellcat Prius We Need but Don’t Deserve

The words ‘Toyota Prius’ and ‘Fast’ have scarcely been uttered in the same sentence, that is, unless you were referring to the rate at which they depreciate.

Out to challenge the status-quo, American tuning house ‘ARH’ have created one of the most insane builds of 2017 by transplanting the Dodge Challenger Hellcat’s V8 into Toyota’s humble hybrid shopping trolley- The Hellcat Prius. 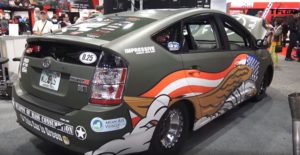 The affectionately nicknamed ‘PRIUSRT8’ utilises the Hellcat’s 6.2-liter V8 with a 4.5-liter Whipple Supercharger to send more than 1000 horsepower (745kW) to the rear wheels via a customised six-speed Tremec manual transmission. 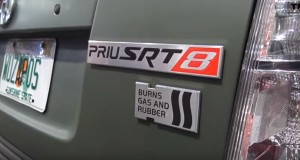 When asked about the motivation for the insane Engine and Supercharger pairing, American Racing Headers (ARH) founder Nick Filippides explained that: “There is no point going for some modified engine with the Hellcat being as good as it is. With the Whipple, it’ll make over 1000hp if we want it to – which is fine by us!” 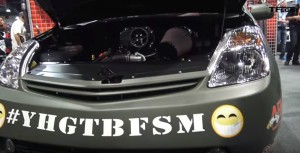 Filippides insists the car is fully operational and road compliant. ARH are yet to send the PRIUSRT8 down the dragstrip but are confident that, with the right setup, it will be capable of a sub-9 second quarter mile.