How do Manual Gearbox and Differential Additives work?

Manual Transmissions and Differentials are deceptively simple devices. A Manual Transmission in its simplest of forms, drives the reciprocating motion created by engine through a pair of gears. You change these gears to different sized gears to effect the speed at which the output spins. A Differential transfers the motion from one axis to another through a series of meshed gears. An exaggerated example of this is shown below: 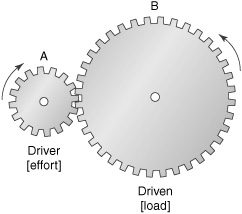 The above gears are often referred to as an under-drive. The small pulley is turning the large pulley, this is akin to a vehicles first gear, where the engine rpm increases quickly but the cars speed does not. This allows for mechanical advantage, giving higher drive force at the expense of speed. If both gears were the same size, the effort and drive speed would be identical, allowing for a higher vehicle spee, as the engine is going to reach its maximum rpm at a slower rate. This is similar to a third or fourth gear.

If the driver gear was larger than the driven gear, it allows the engine to turn slowly, with a comparable road speed (similar to a fifth or sixth gear). This is also the reason your final gear is typically referred to as “overdrive”.

How Additives assist your Transmission and Differential

As you can imagine, there is a lot of force placed on the teeth of your vehicles gears and manufacturers recommend particular gear oils to lubricate them. This will also help reduce wear, noise and help in obtaining a smooth shift. A gearbox with no oil in it will only last a matter of hours if you’re lucky.

Gear additives are available to add additional protection, and make for a smoother shift. The way they do this is simple on the surface…

Take for example Nulon’s G70 additive, one of the most popular additives on the market. It contains polytetrafluoroethylene (PTFE) which on a molecular level is very very small. When placed under pressure it actually penetrates the metal surfaces. While the metal components may appear smooth at first, when viewed up close the flat machined surfaces actually appear like the surface of the moon, with rises and undulations. The additive embeds itself in the metal, providing an additional layer of protection, and smoothing the inconsistencies in this surface. This makes for a smooth shift, quiet operation and additional protection.