This is without a doubt one of the countries toughest and best set up Landcruiser tourers!

By far one of the toughest and best set up tough cruisers we’ve ever seen, Jack Rusty’s 80 series Sahara is a track conquering, bog hole swallowing beast. Twin locked, a big lift, and awesome tyres are just some of the capability combo that help propel him to the top of any obstacle.

With the legendary 1hdt turbo diesel engine powering the solid axle weapon, there is very little that stops a well set up 80 series landcruiser and despite their age, they’re still one of the most desirable 4wds around!

When we asked Rusty what attracted him to his current cruiser, he had a simple answer for us; “Low kilometers, factory manual and a Sahara model – In simple terms, it was a rare find!”

He went on to say, “I generally wanted an 80 series, so when a low k’s factory turbo diesel Sahara in manual came up 100% stock as a blank canvas it was a no brainer for me.” 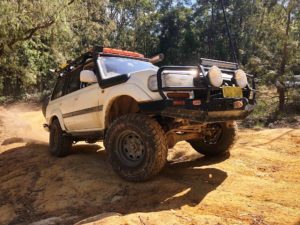 “I love it because it takes me on mental trips and I’ve set it up as ‘tough tourer’ and it’s not every day you see a factory twin locked 80 Sahara in factory manual either.” Having been on a handful of trips with Rusty, we certainly agree that this ‘tough tourer’ is ready for just about anything we can throw at it.

The final question we really wanted to know the answer to is would the mighty 80 series ever pop up for sale! A brief laugh from Rusty was followed with; “I would never sell it and don’t expect it to be sold after I die either. It is by no means to leave the family… ever!”

Rusty has said himself that his 80 series is a never ending project with plans in the near future to add quite a few bits and pieces including but not limited to; a GPS tracker, ‘Drifta’ drawers, high flowing the factory CT26 turbo (ported and polished), fresh injectors, darker tint, ‘Stedi’ LED spotties to replace the big reds, inserts in the MHM sliders, heavier duty rear springs, front sway bar extension, aftermarket cruise control and even possible sound proofing!

We can’t wait to see what the future holds for Rusty’s 80 and see his vision come to life. 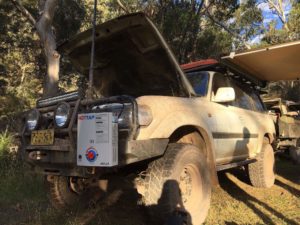 The renowned and highly sought-after factory turbo diesel 1HD-T engine in the 80 series is a reliable and very capable power house. From factory making 164 hp at 3600 rpm and 361 Nm of torque at 1400 rpm at the engine of course they weren’t quick, but they did the job!

Having been modified and tinkled with, Rusty’s 80 series is thought to be making around 30% more power than standard now all while running much cooler and more efficiently. In the near future with further modifications, we’re expecting to see results of around 200hp at the engine with 542 Nm of torque too – not bad for a nearing 30-year-old power house! 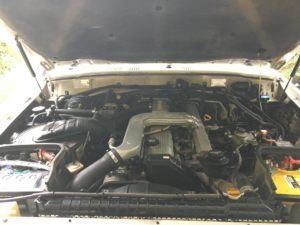 Rusty’s Landcruiser is rare for a number of reasons. Being a Sahara is one of the major players. Being a Sahara means that not only is the interior level spec’d up to include rear air-conditioning and a sunroof, but it also has factory Toyota Landcruiser electronic diff locks.

One of the most capability enhancing and costly modifications anyone can do to a 4wd is putting in diff locks, to have them from factory in a 1990’s car is insane! Coil springs and solid axles front and rear mean his cruiser articulates like nothing else, some would say it flexes “like a sick giraffe!” 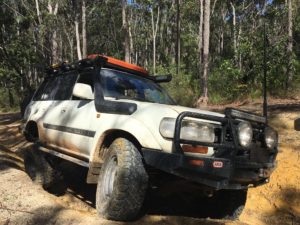 Now there is no denying that a big lift, big tyres and some hard-core wheels can make or break a 4wd. Not only do the above transform how the car looks but how it performs in the bush. A 3” Old Man Emu suspension lift both increase suspension articulation but also increases ground clearance.

The extended 5” shocks mean that there is HUGE travel in the suspension ensuring as much tyre is on the ground as possible! The large 33” Cooper ST Maxx tyres improve ground clearance for the body but also diff/axle clearance and the change to an aggressive all-terrain tread pattern means mud and tough terrain are no drama for this tough tourer. The rough and ready Dynamic steel wheels also ensure that there are no scrubbing issues with the larger tyres and mean that if for any reason you dent a wheel in the bush, it can be easily reversed with a hammer and you can keep on going! 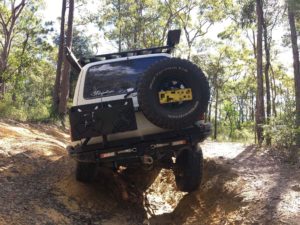 The cabin of Rusty’s Landcruiser isn’t as extensively modified as the rest of the car yet! With a selection of rocker switches for driving lights, some USB 12v power outlets for charging devices and the semi-permanently installed HEMA navigation system, it gets the job done!

Some heavy duty rubber floor matts, neoprene seat covers and a false floor in the rear of the vehicle just about complete the set up. With a drop down ‘easy slide’ fridge slide and Waeco CFX50 fridge, the interior is simple but effective and gets him by.

With plans to put a handful of gauges in it soon to monitor the engine and turbo, we can’t wait this rig in a few months!

– Auxiliary roof lights to light up under awning

– Homemade false floor in the back 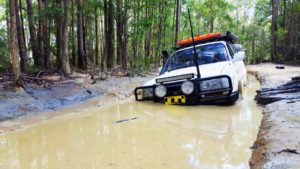 Want to be featured in our My Drive series? Submit your builds here; [email protected]