One Man and his LeKart: Getting Track Ready

Speed, power and driver enjoyment are not necessarily the same thing, as has been regularly pointed out by many motoring journo’s over the years. To support that theory, the Porsche GT3 is no Bugatti killer but regularly trumps all comers in the annual Evo Car of the Year award.

Despite owning more exotic machinery, there is something timeless about the fun you get from driving a 205. It’s lightweight, tail happy disposition provides endless thrills at speeds generally considered legal on most Australian roads. That smile factor combined with the irrational first car love affair makes the LeKart a perfect donor for a classic race car rebuild and restoration.

The popularity of 205 race series means there’s a treasure trove of upgraded race parts available off the shelf, capable of transforming the humble hatch into a giant killer. Tipping in at around 850kg from the factory door, it’s an emaciated version of today’s bloated safety conscious hot hatches. In the 80s they had no need for airbags, intrusion bars (that actually worked), sound deadening, power steering or kilometres of wiring. Just the basics of an oversized engine wrapped up in a tin foil like shell ready to be flung down winding roads at break-neck speeds.

The brief for the car is that it needs to comply with CAMS Modern Classic rally regulations and be capable of competing in Targa, track sprints, hill climbs and the like. Basically, an all round fun weekender sympathetically modified for the period.

Targa regs effectively rule out the usual 405Mi16 / 306 GTi6 motor swap, so the original 1.9 litre XU9J 8 valve motor is being retained along with the standard 1.6 litre BE1 transmission. Apart from that, the car is effectively being rebuilt from the ground up with the single purpose of speed achieved through agility and lightness. An engineering philosophy embodied to great effect by Ferdinand Porsche and Colin Chapman of Lotus.

But before you strip down, rebuild and pat yourself on the back for a job a well done, it’s probably a good idea to set a performance baseline. With this in mind, we planned an easy track day with the Peugeot club to the Marulan driver training facility in NSW to set some benchmark times and see how she drove after 10 years idle! 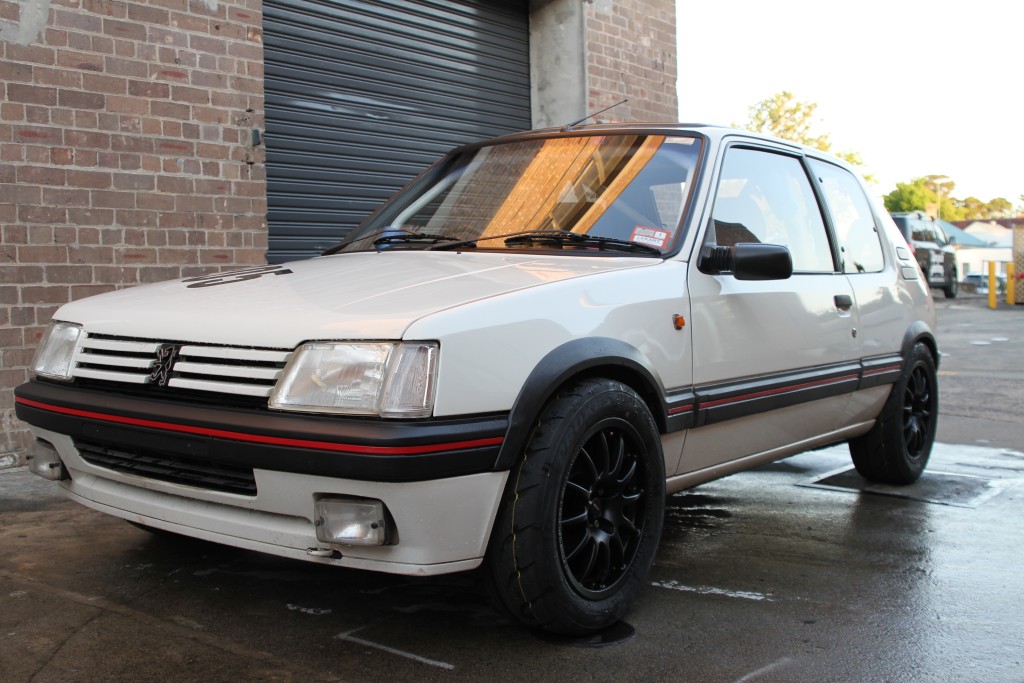 With the rebuild looming we focused doing the basics just to get her to the end of the day rather than peak speed. First up was to service the basics: MANN Oil Filter, Nulon 20W-50 High Kilometre engine oil, Nulon coolant and NGK spark plugs. We fitted a new set of track tyres on 15” rims (down from 16”) to reduce unsprung weight and take advantage of the stiffer side walls in R-Spec rubber. A quick wash and chamois and she was ready to go! 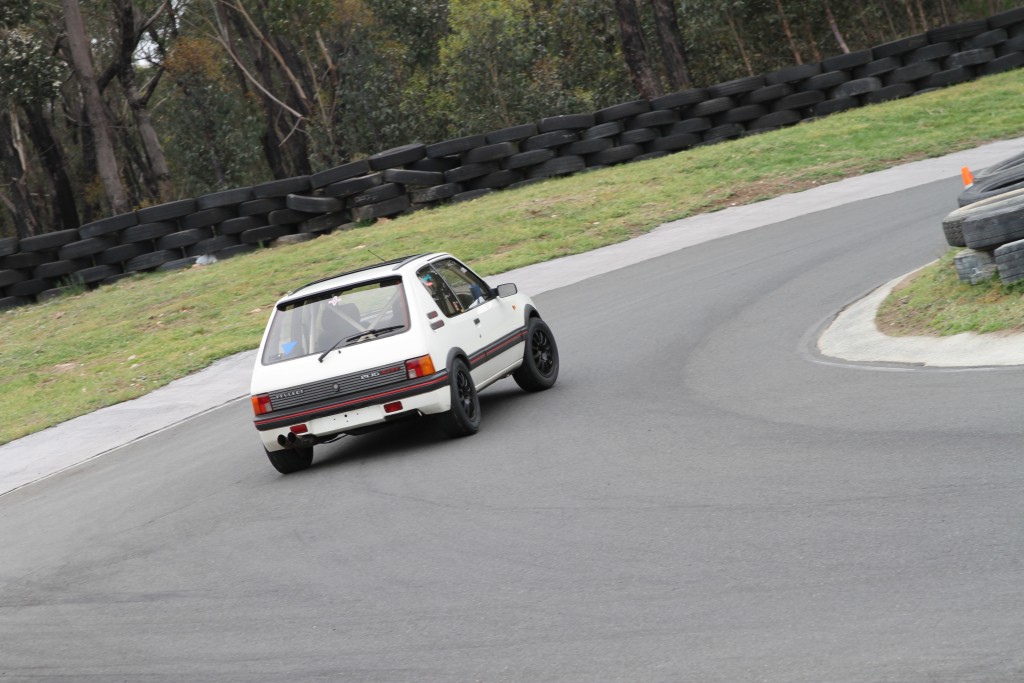 Nothing makes you feel your age than trailering your car to the track in comfort rather than bouncing there and back in transport barely suitable for road use. Though it substantially reduces the anxiety that you will actually make it home!

Marulan is a compact and twisty circuit a few hours out of Sydney with a relaxed atmosphere, perfect to get a feel for a car without the pressure of perfect laps on a race circuit. The morning sessions went well, with the only problem being a slight brake fluid leak from hairline cracks in the pistons of my Wilwood callipers. Amazing considering the years of neglect; a testament to modern vehicle engineering. 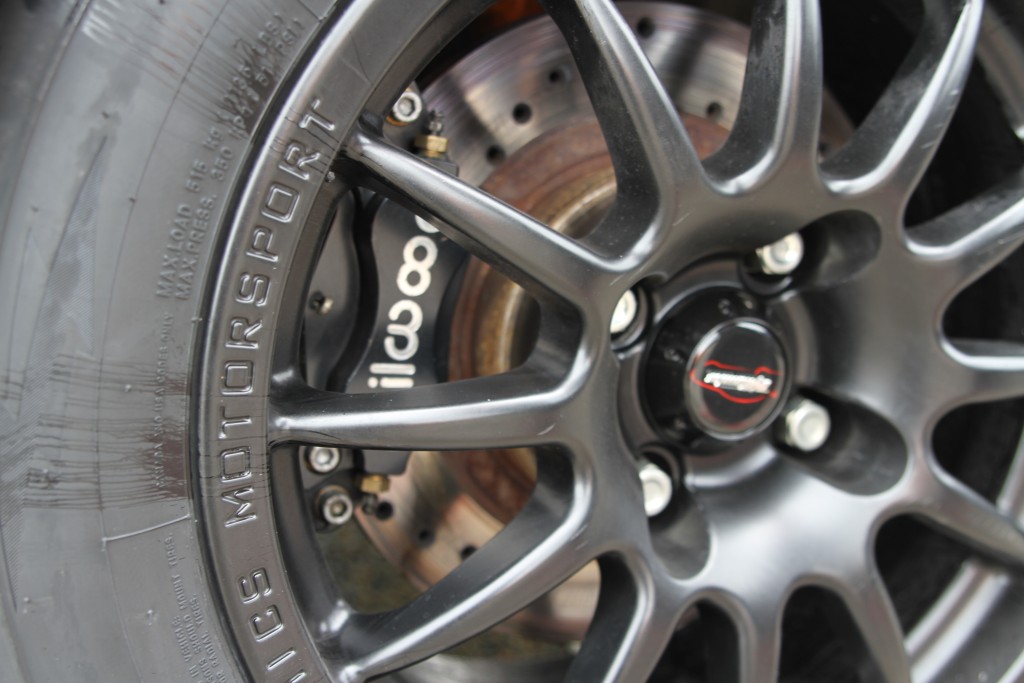 With confidence in the car raising and reckless abandon for my lack of skill, I ‘pushed’ on in the afternoon sessions setting some decent if not inspiring lap times. Considering the car came factory equipped with 105 bhp 27 years and 270,000km ago it was still loads of fun to drive and plenty powerful for the diminutive track.

One casualty that could be attributed to neglect and 80’s French wiring was the tacho. The RPM dial was firmly fixed at zero. No matter, we had a trailer to catch our fall. Coming in off a hot run, feeling smug about the robustness of the little Pug I parked it up in the pits only to discover a plum of steam coming from my bonnet… 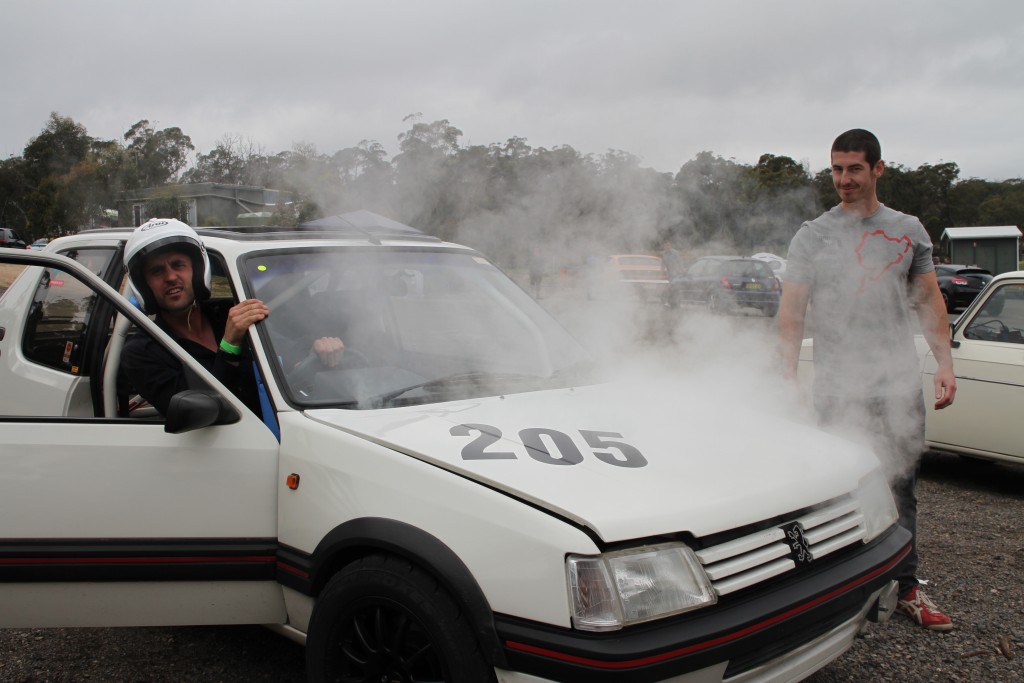 Our resident mechanic James has narrowed the cause of the over pressurised cooling system to any of about 267 things, the most likely being a dubious head gasket and liner seals hanging on for dear life! No matter, we just topped her up from the nearby water tank and headed back out. For the record, we would not recommend this course of action but this motor only had a few hours left to run. Though it did feel like a real life Top Gear challenge!

Our best run was set at 54.6 seconds, with plenty of room for self-congratulatory improvement when we return with a car that has sealed water and oil circuits and double the power!

Next Instalment: The Spec Sheet & Strip Down