It was a heart-stopping moment when Toyota’s leading car stopped dead on the pit straight with just minutes left.

Having reported a problem with less than 3 kilometres to go, Japan’s Toyota TS050 manned by Kazuki Nakajima came crawling to a stop. Everyone looked on in disbelief as Porsche raced on to victory, past the halted Toyota.

For nearly 24 hours there was nothing but smooth racing for Toyota, but another chance at success slipped through their fingers, finishing as runners-up for the fifth time.

Neel Jani drove Porsche to first place for the 18th time at Le Mans 24 Hour Race after a cat and mouse battle against Toyota throughout the day.

It was a mixture of heartbreak and elation, as Porsche celebrated its win, Toyota only had one word to say, “Heartbroken.”

Toyota’s number 6 car also faced issues but was driven to second place by Stéphane Sarrazin followed by Audi’s number 8 car in third place. A moment of horror for Toyota was a moment of luck for Audi as they managed to hold onto a Podium finish, continuing their 18-year stint of podium wins.

Toyota TS050 co-driver, Anthony Davidson had this to say via Twitter: 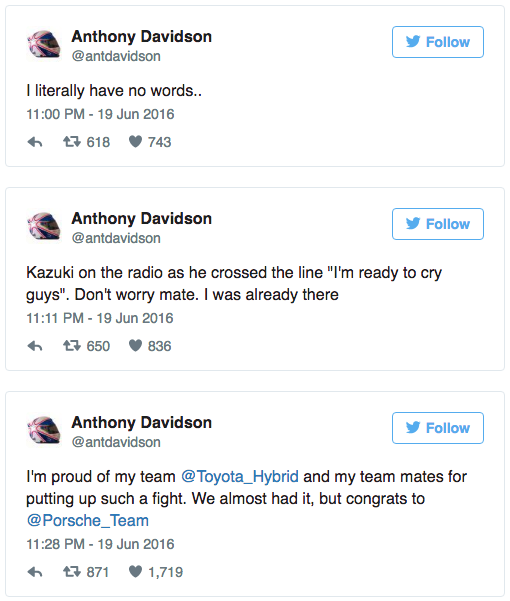 It’s unfortunate that such a dramatic turn of events should overshadow what was a great race. There’ll be questions for Toyota to answer in the upcoming days as to why its car suffered from engine failure and a lot of celebrating for Porsche.