Engine oil is a simple yet often misunderstood consumable. Most vehicle owners drive around blissfully unaware of what is circulating throughout their engine, and apart from an engine oil warning light (danger!) or occasionally checking their dipstick, they probably don’t care. That said, engine oil is literally the lifeblood of your engine, so changing it regularly with a quality product is vital to the future performance and reliability of your engine.

Further, the advanced engine designs and technology we enjoy today has meant that engines are on average smaller in capacity than years gone by, yet typically more powerful and more fuel efficient. The net result of these fundamental design changes is that engine pressures have significantly increased (in fact, on average they have doubled), causing more stress on the oil circulating throughout the engine. So the oil in your engine is now operating under higher temperatures and stress, and according to Castrol, in some areas withstanding pressures in excess of 10,000kg per square centimetre!

Consequently, it is fair to say that the chemical engineering that goes into making engine oil is extensive, and not all brands are the same. Keep in mind that engine oil, like anything else, is available in many brands, at many different price points, and quality can vary in a huge way!

So what engine oil should I use when servicing my cars?

Firstly, let’s go back a step. As I have discussed previously in You don’t have to go to the Dealer to keep your New Car Warranty, you should be aware that car manufacturers sometimes use misleading phrases to try and con you into only buying genuine parts and consumables. If you think about it, it takes a lot of equipment, money, and engineering know-how to manufacture engine oil – so in fact, when you go to the dealership to buy that expensive bottle of genuine VW engine oil, you should know that it will almost certainly be repackaged Castrol engine oil. Sometimes the dealer won’t even repackage the oil – yet they still charge a big markup! As an aside, it’s very important that whatever oil you choose, it should state that it meets the vehicle manufacturer’s standards.

So for my Subaru Forester XT and my partner’s Volkswagen Golf MK5, what oil do I use? The answer is Castrol Edge. It’s a win-win – I get to avoid the dealer’s expensive oil prices, yet my engines still get the best synthetic oil that is used by VW and Subaru dealers all around Australia and meets their exacting standards. Sure, Castrol Edge is a little bit dearer than many semi-synthetic oils on the market, but my cars deserve the best…and paying a little bit more for regular service beats paying a lot for major engine repairs later on.

I have found that changing to Castrol Edge after using a competitor brand of synthetic oil has resulted in smoother and quieter running engines in both vehicles while also maintaining great performance and fuel economy. After all, when you pop the bonnet and see ‘Volkswagen recommends Castrol’ on both the radiator support and oil cap, it’s hard to use anything else – so I choose Castrol Edge Full Synthetic 5W30 Engine Oil! Likewise, in the Forester, Subaru Australia recommend using Castrol lubricants, and in the EJ25 turbo engine in my car Castrol Edge 5W30 A3 B4 Engine Oil works a treat. 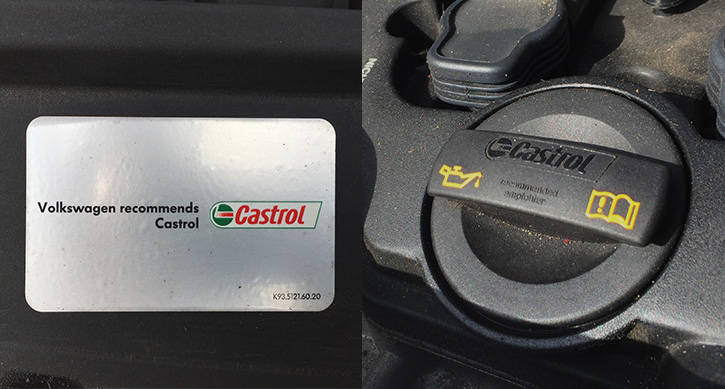 Should I use Castrol Edge for my next service?

There are plenty of oil brands on the market, and many that meet Subaru and Volkswagen’s strict standards. But for peace of mind, and a great oil at a great price, you can’t beat Castrol Edge. The TITANIUM FST technology in Castrol Edge doubles the film strength of the oil, which helps to reduce friction (meaning less engine wear) and prevent oil film breakdown. Castrol have also put their money where their mouth is and published some pretty in-depth tests which you can check out here. The quality of Castrol lubricants and fluids means it isn’t just Volkswagen and Subaru Australia that recommend using Castrol; Jaguar, Land Rover, Seat, Audi, and many other car manufacturers do too! So why not use Castrol Edge for your next service?