What do Slave & Master Cylinders do?

Slave Cylinders and Master Cylinders are hydraulic components typically found in the clutch and brakesystems, They come in many shapes and sizes although all almost exclusively serve the one purpose. That is to transfer the physical motion created by the driver upon the clutch and brake pedals, to the components they operate
The master cylinder is a hydraulic piston operated by the driver. When you depress the clutch pedal in a car the piston inside the master cylinder is pushed forward, Forcing the hydraulic fluid inside down the lines towards the slave cylinder.

The only Variant from a clutch system to a brake system is that instead of a slave cylinder being operated by the hydraulic pressure, it is your brake calipers instead which operate in much the same fashion.

The hydraulic fluid used in both systems is almost always referred to as brake fluid (though it is used in clutch systems as well and is sometimes referred to as clutch fluid. It comes in a few various types. The most common are DOT3 and DOT4 . DOT4 can replace DOT3 but your entire system must be flushed first by a mechanic. DOT4 has a much higher boiling point. DOT5 is a relatively new addition and has a completely different chemical makeup and as such is absolutely not compatible with DOT3 or DOT4. If you’re ever unsure of what to use always refer to your owners manual. 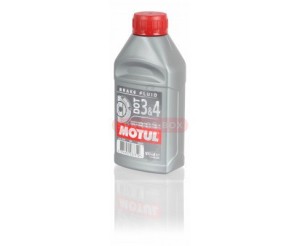 The boiling point and condition of the hydraulic fluid is absolutely key. The fluid is hydroscopic. This means it absorbs water, even from the atmosphere around it. This gives brake fluid a definitive shelf life once opened and a service life that must be adhered to. As water has a boiling point of 100ºC (much lower than brake fluid) as the water content in the brake fluid gradually increases, the boiling point lowers.

The danger in this is that while Hydraulic fluid cannot be compressed and makes it ideal for transferring force. Air can be compressed. as Clutches and brakes can generate considerable heat they can cause fluid that is not in prime condition to boil.

As we well know when fluid is boiled oxygen is released and as a result you will have air  bubbles within your hydraulic lines. If you compress the pedal with air in the line instead of motion being transferred from master to slave you will simply compress the air within the line and no motion will be transferred. This means partial or complete loss of your clutch or brakes.