Ahead of Father’s Day we’re celebrating all things dad (don’t forget to check out our Dad Day Movie Car Promotion) and we’ve a bunch of dad stories from our team at Sparesbox for your reading pleasure.

James Andrew (Service Coordinator and Head Mechanic): The brown car that’s being washed in the photo, it’s a Datsun 240Z that dad used to race. A 2 seater, he had a small seat made in matching material and shape to the interior that sat just behind the front seats for me. We took the car to wakefield park the day it opened and did a few laps,  he used to strap teddy bear into it when he raced.

Tara (Head of Marketing): Once Dad was filling up at a petrol station, he moved the car away from the pumps to jumped out to pay leaving me and my brothers in the car (I’m the eldest, I was about 7yrs old, so even more car illiterate than I still am…)

The house next door to the petrol station started getting gradually closer because we were rolling towards it- Dad hadn’t put the handbrake on.

A couple of people started running to try and stop the car, but we just thought lots of strangers were trying to jump into our car, so we started screaming hysterically.

Thankfully this was in Dad’s younger, fitter days so he managed to jump into the moving car and yank the handbrake before we crashed into the house.

We thought he was a superhero saving us from potential kidnappers. He said he didn’t want to show off about his heroism to Mum, so we agreed not to tell her…

Beatrice (Social and Content Coordinator): My Dad was always the one who took us to the movies as kids. Without a doubt you’d look over to him during the course of the movie and there he would be….snoring. Without a doubt, he would always fall asleep! By the end of the movie, we would be tugging on him telling him to wake up as everyone else was leaving the cinema and the credits were almost done! 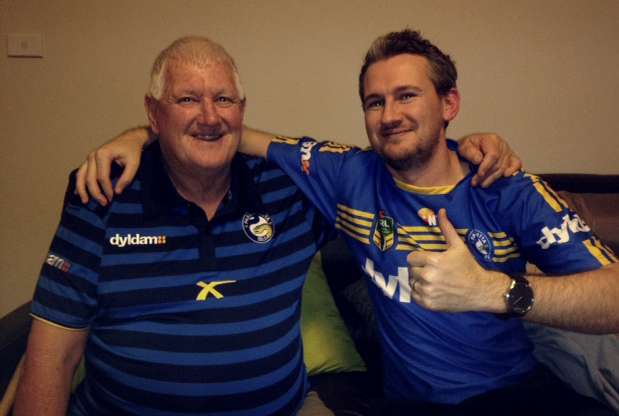 Brendon (Head Graphic Designer) : Whenever my Dad wanted to watch a movie I was too young to see, he used to hand me a wad of money and tell me to go to the shops and get food. It was a win-win, he got to watch his movie and I got the money.

Another time my friend and I asked if we could get a lift to a Parramatta game, which was a bit of a distance so we thought he’d say no but surprisingly he said yes. As soon as we’d started driving the wrong way on the M4 we realized why he’d said yes. He thought we were going to Penrith, which was closer. We told him were going to wrong way, thinking of how far we’d have to go before we could exit. My dad had another idea. He just did a UTurn on the middle of the M4.

Brad (Content Specialist): My Dad grew up just down the road from Brands Hatch in England, so he used to sneak in through the nearby farms and watch Formula 1, Touring Cars, and everything else without having to pay a cent.

Kristen (Digital Marketing Manager): When my brother was really young, my Dad was always convincing him that he’d done things that he hadn’t. Once he said to my brother, “Remember that time we had a flat tire and we made you be the tire and run alongside the car to keep it going?”

My brother was totally convinced.