On Sunday, Ford fighter Mark Winterbottom purged a career of persistent shortcomings. From a past beset by failure (having been a winless full-time pro since 2004) the man affectionately known as Frosty concluded the Sydney 500 amid great fanfare and heated enthusiasm. Shane van Gisbergen may have finished the weekend in first, and Jamie Whincup’s astonishingly consistent season-long form was typified by another ‘nearly’ race, but Sydney-born Winterbottom was in no mood to give up the attention and his place in V8 folklore.

Placed as bookies’ favourite by many – this author included – before Friday’s qualifying, only disaster would have sustained Winterbottom’s (strictly platonic) relationship with bridesmaids. Alas, crisis for Frosty was eluded as he escaped the shackles of finishing second, and we witnessed him finish the year a comfortable, well-earned 238 points ahead of the pack. After ten previous, failed attempts, Sydney saw the Doonside man crowned V8 Supercars Champion.

However, things were not so simple for his closest rival and source of much pre-race talk, veteran Holden driver Craig Lowndes. A crash on Saturday morning at the 11th turn ceased any hopes Lowndes carried of continuing the mano-a-mano drama into Sunday, and so it transpired that by lunchtime on Saturday the packs of Frosty followers were breathing much easier.

Despite congratulating Winterbottom and his team after Sunday’s race, a born winner like Lowndes is bound to be disillusioned with his final weekend performance, particularly the above effort. Yet it would only be fair to acknowledge Lowndes’ efforts: a second place season finish is no small feat, and his exploits in unremittingly clawing back an early-season Winterbottom lead have brought the excitement V8 fans crave. Lowndes is always there or thereabouts at the business end of the season, and so the insurmountable lead collated by Winterbottom by mid-season must be considered one of the finest achievements in recent V8 history.

Well done Frosty. I always believed in you. 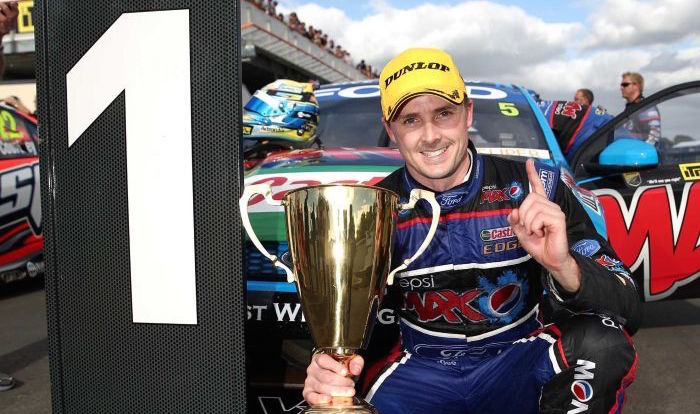 The champion points to an aeroplane. Or maybe to signify his 1st position. Look at his face, I’ve never been that pleased.