A vehicles “Wheel Alignment” simply refers to the position of the wheels in relation to each other and the body of the car. Like a shopping cart with a wheel that won’t straighten, if your wheels aren’t “true” to each other, your car will likely not steer straight, wear tyres quickly, and underperform when braking. If you consider that everything a car does relies on the tyres having good contact with the road surface, you can start to appreciate how key a correct wheel alignment is.

Obviously if your more concerned about improving the handling of your car or changing its nature (be it on the track or your local National Park, within the speed limits of course) then this all goes out the window.

At this point you may be asking yourself what Understeer, Camber and Toe angle means. We’ve got the answers here. First its important to understand what understeer and oversteer are…

Understeer is more common in (but not limited to) front heavy, front wheel drive cars. Understeer occurs when the tyres don’t have the available grip to change the direction of the car, resulting in the front of the vehicle “washing out”. It feels as though the car does not want to turn. Most cars are biased towards this as it’s predictable, and as speed is scrubbed off, it can be corrected given enough road to do so. 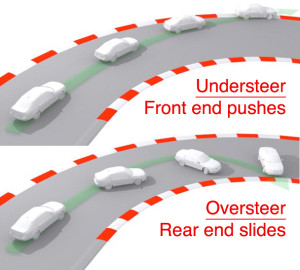 Oversteer is the more exciting of the two, and more commonly found in (though not limited to) rear driven cars. Oversteer is caused by insufficient grip in the rear, causing the back of the car to “wash out” or slide as though trying to overtake the front of the vehicle. Most “sporting” drivers prefer oversteer to understeer as it can be predictable in its nature with a driver accustomed to its behaviour. However, for Grandma driving to the shops, understeer is a safer occurrence.

Both understeer and oversteer can be caused by many things. One big factor is the wheel alignment. While all cars have a basic characteristic that cannot be changed, the behaviour of a car can be altered greatly by changing the following aspects of the wheel alignment. 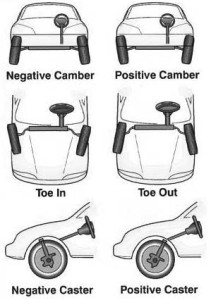 What is Camber Angle?

There is really no good reason for positive camber. Most cars have neutral to slight negative camber. Negative camber can change the amount of rubber in contact with the road during cornering, as the vehicle leans onto the outside tyres, as well as correct the naturally occurring loss of negative camber when turning the wheels. Quite often if you turn a cars wheels to full lock you will notice slight positive camber. This is a fundamental flaw due to the pivoting and steering points. Too much negative camber also means less tyre in contact with the road when driving straight, so care must be taken. Most cars when braking gain negative camber to an extent  – this extent is related in part to the “castor angle” and the lower control arms straightening and pushing the base of the wheel outwards. This can also result in bump steer. Just ask any chiseler with a slammed EG Civic and he’ll explain what that is to you.

What is Castor Angle?

Castor angle is quite simply the centre-line of the tyre in relation to the pivot point of the strut top. Positive Castor refers to when the wheel centre-line is forward of the strut pivot point. Positive Castor aids the effects of Camber when cornering, and can be used in relation to camber to avoid having a larger amount of camber than required and compromising straight line grip. It increases  the mechanical efficiency of the steering as well, meaning it will get harder to turn the wheel. This is hardly a problem in modern vehicles with power steering. It also means the self returning action that normally occurs will be accentuated, returning quicker. Negative Castor almost never occurs, as similarly to positive Camber it has almost no advantage.

What is Toe Angle?

Toe angle is the degree at which the front of the wheels point inwards/outwards. Quite simply Positive Toe (Toe in) aids straight line stability and controllability, while having a negative effect on the initial turn in into a corner. Negative Toe (Toe out) does the reverse. It aids initial turn in and direction change, but can have a negative effect on the stability of a car at high speed and under brakes. Toe is usually adjusted in VERY small increments as a small change has a profound effect. It’s important to note that while Toe out aids initial turn in, it can effect the vehicles Ackerman angle (the angle the steering arms make in relation to the centre of the rear axle. In short it can affect the turning radius of the car. 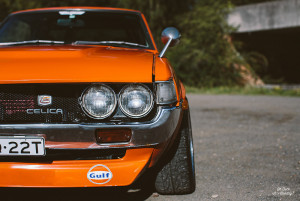 Getting a wheel alignment right for the street or for the track takes experience and a sound knowledge. For this reason its always advisable to have it performed by an experienced Mechanic you trust.