Why XFORCE are Going from Strength to Strength

A couple of days ago, we were issued with the task of fitting an XForce Exhaust System in a Golf GTI. Coming into it, we knew about the general consensus XForce Exhaust had previously earned itself in terms of quality and innovation, namely that it wasn’t much good at all.

Previously mass produced in China and thus coming with the build quality to show for it, XForce were once seen as the budget option, bolted onto the undersides of VZ Commodores with stock engines to give an impression of performance that wasn’t actually there. As such, they never quite earned the level of prestige that came with some of the more expensive brands available to import.

Now though, things have taken a turn for the better at the Sydney institution, and while they’ve been some of Australia’s best selling exhaust suppliers for a long time now, they appear to have upped their game, providing the technology and build quality to go with their indisputable success.

After we finished our install, our resident mechanics and experts had one consensus on the new and improved XForce: “This is actually pretty damn good.” Neatly packaged, all of the components were solidly put together. A simple bolt-on full stainless system for the GTI, it fitted seamlessly, and the finished product looked great. It had a slightly bigger tip, and as you can probably imagine the entire system had been streamlined from the stock exhaust. 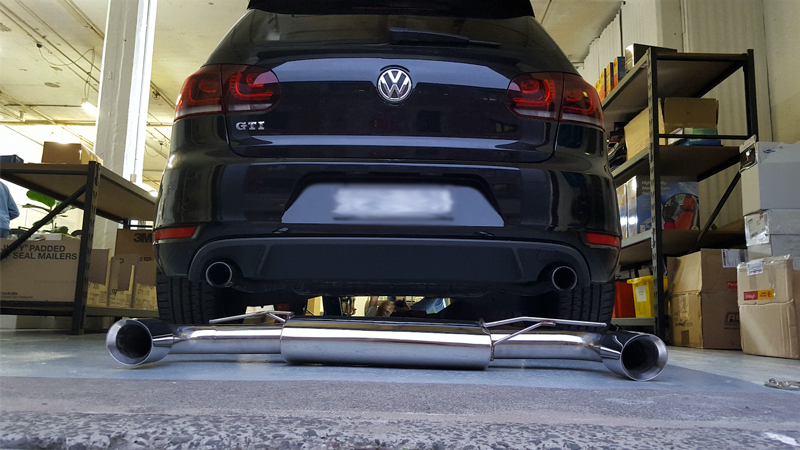 The best thing most people had to say about the system is that it was delightfully understated. It was simple, but well made. All the welding and joining was of premium quality, and just holding it in your hands you can tell it was put together well. As we previously said, it fitted perfectly, and on the car it gave a great impression of understated performance. The same can be said for the sound. It certainly wasn’t ferocious, but it added a distinct-yet-subtle growl to an already great-sounding engine.

At almost half the cost of a similar system from brands with a more premium pedigree, XForce finally boasts the quality, price and sheer value for money that would justify making the leap into a performance exhaust. You can shop a great range of XForce exhaust systems, along with a wide variety of performance parts here. Those new to the world of modding should consider the XForce S-Spec Exhaust system – a wonderful entry-level choice. There are also more advanced and powerful models of XForce exhaust systems available at Sparesbox, including the XForce R-Spec Exhaust, Xforce Pro Series, and Xforce Extreme Exhausts.